At 10:50 AM (Washington, DC Time) October 14, 2019 Fox News Channel interviewed 3 Republican Representatives, in the halls of Congress, Jim Jordan was one of them. They complained about the impeachment restrictions the Democrats placed on the Republucans.  They also complained about the Democrats’ stampede to impeachent. This adds credence to the supposition that President Trump will declare Marshall Law on Congress and take Nancy Pelos, Jerry Nadler, Adam Schiff, and others into custody for a military trial for Treason. 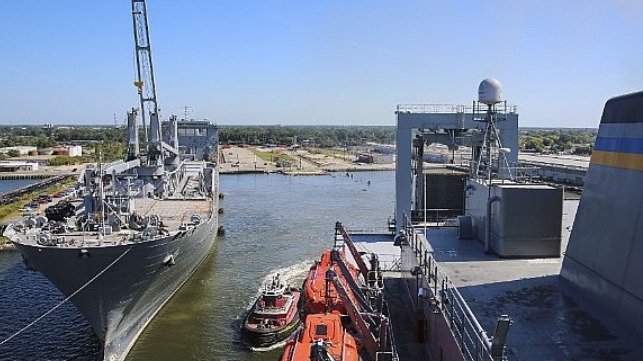 U.S. Military Sealift Command reports that the recent activation test for half of the aging emergency sealift fleet proceeded well, especially when it came to crewing, class inspections and maneuver drills. The exercise tested the ability of the MARAD Ready Reserve Force and the MSC surge sealift fleet to crew up large numbers of ships, break them out of layup and deploy them on short notice.

These drills are not unusual – this was the fourth so far this year – but they are typically much smaller in scale. The exercise covered six MSC vessels and 22 RRF ships, the largest activation of the sealift fleet since the invasion of Iraq in 2003.

In a so-called “turbo activation,” selected ships have to transition from a reduced operating status (layup) to a fully crewed, ready-to-go status within five days. 23 out of 28 selected vessels successfully crewed up, made their sail date and departed for a sea trial on time. Five, including four MARAD ships and one MSC ship, reportedly did not, though MSC notes that all of its ships returned to port on schedule at the end of the drill. U.S. Transportation Command plans to issue an update on the outcome, according to a spokesman.

“The biggest thing that was different about this exercise than those we have done in the past was the sheer number of ships which got underway,” said Capt. Hans Lynch, Military Sealift Command Atlantic’s commodore and the exercise’s East Coast officer in charge. “The turbo activation was a really good test for the union halls’ ability to provide enough civilian mariners to get all the ships underway simultaneously. [It] was also a good test for our certifying authorities, the American Bureau of Shipping and the U.S. Coast Guard, to see if they would be able to attend to all of the vessels at the same time . . . The other concern was bringing aboard technicians and subject matter experts needed to get the ships to sea, short notice. Everyone did really well. None of the ships had major issues due to not being able to be inspected or getting people required to the vessels.”

Once at sea, the activated vessels conducted standard sea trials to test their mechanical systems, including an eight-hour speed run, an anchor windlass test, a bow thruster test, distilling plant test and a test of the ships’ steering systems. They also carried out drills on best practices for wartime shipping: the ships’ bridge teams sailed their vessels through a simulated minefield, established “darken ship” at night, and checked to ensure there were no unauthorized transmissions from personal devices. The six MSC vessels carried Navy Reservist tactics advisors, many of whom are merchant mariners themselves in their civilian lives, as part of a new program to transfer skills for sailing in contested environments.

“I hope that we continue doing these exercises. From a material readiness perspective, these ships are 40-plus years, so I think it is important that we continue to test this capability and perhaps perform even longer and more comprehensive testing and see how these ships will perform,” Lynch said.